Kim Kardashian and the hard video: in the gym in bikini and boots. Social networks are going crazy 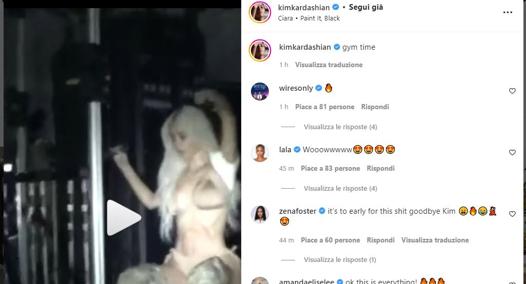 Some disagreements about their future contributed to the end of the love story between Kim Kardashian and Pete Davidson: “Kim doesn’t want the same things that Pete wants. He wants kids, she already has them. Even if she would be open to more, it’s not her priority.” These are some of the reasons for the end of the couple’s love story, as reported by Page Six in these hours. At the same time, to point out that the breakup of her relationship hadn’t upset her so much, Kardashian posted a very transgressive video: in bikini or lingerie, cuissard, over-the-knee boots and smartphone wandering alone in a gym. Hundreds of thousands of views.

Kim Kardashian and Pete Davidson at the 2022 Met Gala

The video is of poor quality but is on the official Kardashian account. Everything takes place in a professional gym with soft lighting and the actress parades between the machines to train with a little provocation.. Without sparing yourself to zoom in on the face and on his body. The video almost seems to be the answer to the many comments about the divorce from Davidson. The couple broke up after nine months of starting the relationship.

It seems that one of the main reasons was the distance. According to page six. “The actor is in Australia shooting a new movie and it seems the distance has turned out to be too great. It put a strain on the relationship, the distance was not easy to deal with. Pete wanted Kim to stay with him for a long time in Australia and she just can’t. And the thing is, Pete is getting busier, so it’s not like this problem is going to go away. They had to face some hard truths: Pete is 28 and Kim is 41, they are at very different times in their lives.”

#ManiMonday: 5 Manicures That Will Make You Book Your Next Visit Immediately