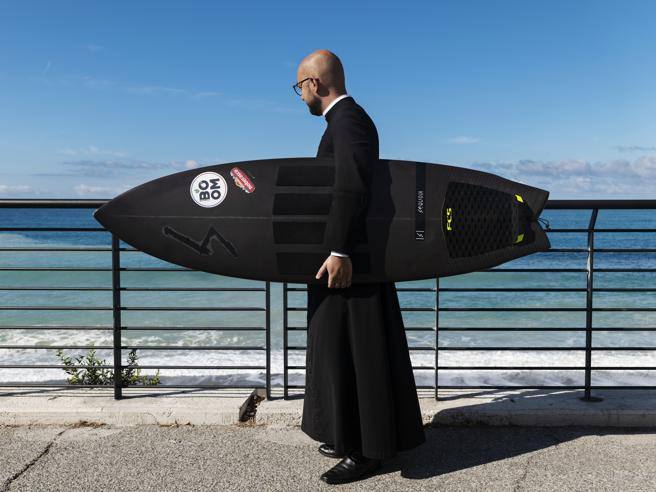 Top models and great stylists, big screen actors and fashion shows. The international red carpets. The world of photographer Stefano Guindani. Known for decades in the fashion system, award-winning and always involved in the social sector. His eye is always original when reading and depicting the world through his lens. As in the case of the photos exhibited in the Milan exhibition: Mens sana in corpore sano, men and women of faith immortalized in shots that show they are engaged in sporting activities. Although in cassock. A competitive spirit with a mystical aura and a great visual and emotional impact. The exhibition is hosted by Leica Galerie Milan, in Piazza del Duomo: opening in the heart of Milan’s fashion week on September 23 and the possibility to visit it until the end of the year will remain open until the end of 2022 (leica-camera.com ).

Taking advantage of the human aspect of the subjects, the photographs shown show an extraordinary dedication and a unique aptitude for pleasure, combined with a disruptive vitality. As in Nanni Moretti’s Habemus Papam, the photographer lets us participate in every story he tells with polite irony, lightness and poetic language: interrupted moments, hints of smiles and essential color combinations manage to make us the ordinary person, the neighborhood of friends. for the church official. Drawing on the suggestions of Mario Giacomelli’s images of the early 1960s, the photographer embarks on an ideological mission to paint a visual story of today’s religious.

All photos are by Stefano Guindani / Mens sana in corpore sano

Who is really behind the men and women of faith? We are often accustomed to perceive priests, nuns and brothers as subjects that are almost detached from reality. The role they play seems so cumbersome as to completely overshadow the space of the single individual. What is certain is that they operate in a context steeped in rules and standards to be respected, in which everything is serious and sincere, ready to condemn any type of personal initiative.

Work Mens sana in corpore sano by Stefano Guindani develops around this social demand and was realized thanks to Leica SL2. The exhibition is hosted in the new concept of the Milan Leica store a few steps from Piazza del Duomo, designed by OHA and Holzrausch and winner of the Red Dot Design Award, one of the most prestigious international design awards. Point of sale and study place dedicated to photography.

Guindani’s story through images aims to cleanse the figure, associated with liturgies and moments of silence, of chaplains, free them from any religious prejudice and transport them to the universal level thanks to sports disciplines. The religious of Guindani play football, study golf, devote themselves to surfing; they are unconventional and daring, as in Sorrentino’s interpretation of the Pope in The Young Pope
.

Stefano Guindani (Cremona, 1969), photographer, has always had a great passion for the language of reporting. Established as a fashion and celebrity photographer, he deepens his interest in reportage first in China and then in Haiti: he publishes the book “Haiti through the eye of Stefano Guindani” (Electa) and with images he creates photo exhibitions in New York, Florence and Milan . In 2015, on the occasion of the 60th anniversary of the international organization NPH Nuestros Pequenos Hermanos, the collection “Do you know?” (Skira) telling the harsh realities of some countries in Central and South America. In 2014, he was a coach and judge of Scattorie NX Generation, the first TV talent show dedicated to the world of photography broadcast on Real Time. In 2016, he published Sguardi d’attore, which collects the portraits of more than 350 actors of Italian cinema. In 2018, in Milan on the occasion of the Salone del Mobile, he exhibited his images at La Statale University in the exhibition “My dream home”. In 2019, he was chosen as the only Italian representative member of the international jury of Huawei Next-Image chaired by Steve McCurry. He has been a Leica testimonial since 2016.