Milan Fashion Week: Moschino chicerella party and skinny pants at Prada show. What are you voting for? 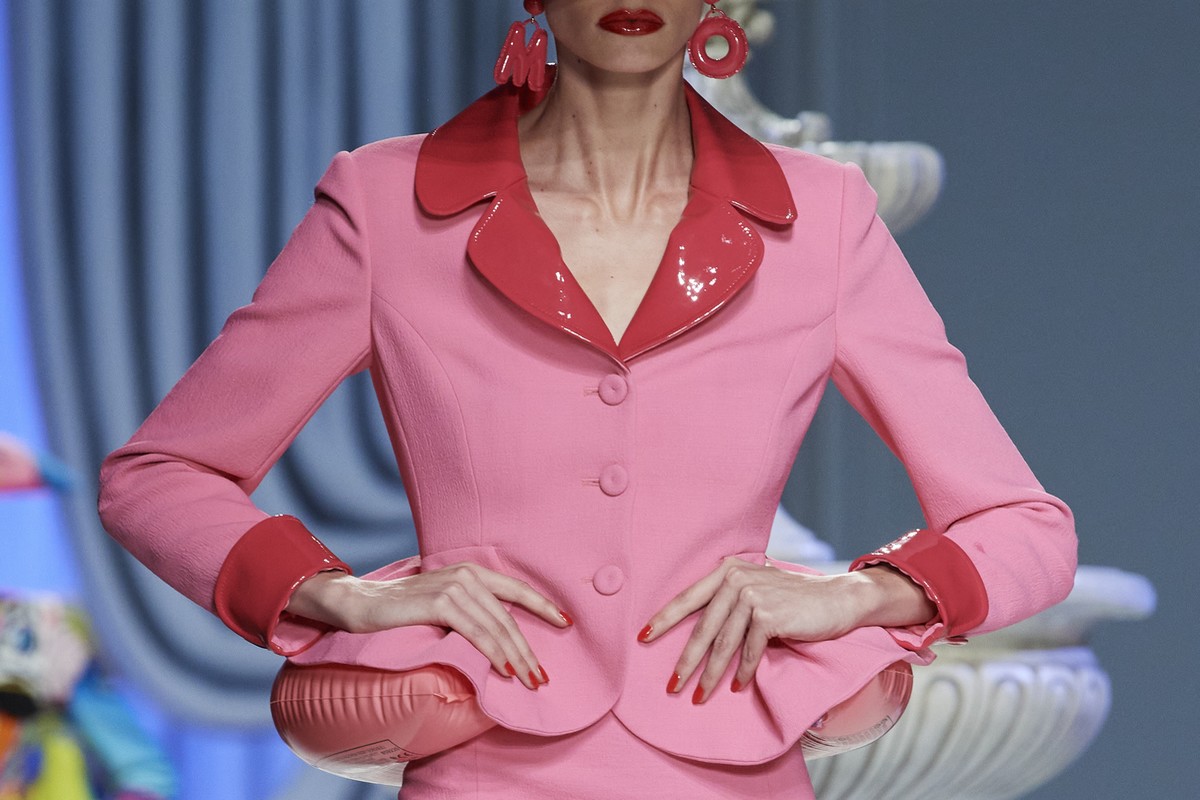 I don’t believe this refers to Fashion Week this year. I think that this year Milan Fashion Week is full of contrasts and that makes it even more colorful. interesting. In the aesthetics of each house and brand (small-large) there is a range that reminded me of the “complexity” of Italian fashion. I may not identify myself, at least aesthetically, but that doesn’t mean I don’t like their spectacular shows. italian houses.

Two houses/giants that have branded Italian fashion and written their own history: Moschino and Prada presented their Spring 2023 collections during Milan Fashion Week and two shows were full of contrasts. On the one hand, it is the mannered and over-the-top aesthetic of the house. Moskino which about Jeremy Scottmanaged to make it even more extravagant. And on the other hand we have a house Prada. A respectable house, which even after so many years remains at the forefront of trends (in all respects). It is a contemporary brand that has been under her artistic direction in recent years. Miuccia Prada and Raf Simons. The two houses are completely different in terms of their aesthetics. This was also evident from their presentations of the Spring 2023 collections. Two collections for different consumer audiences, each of which influenced the spring season of the new year in its own way.

Jeremy Scott is doing fashion with courage. He is not afraid to mock (important) social issues through the most ridiculous subjects. We saw him create dresses inspired by McDonald’s fries and now we see him celebrating beach accessories. The eccentricity and theatrics that characterize the camp style he often indulges in were also at the heart of the Spring 2023 collection. He was very inspired by his designs. Franco Moschino from the 80s, hence the heavy-shouldered dresses and suits, the oversized hats and, of course, the combination of black and red (the Maison’s trademark). But as the collection has gone on, we’ve seen Scott’s “sass” unfold from within. inflatable products for the pool.

Swimming trunks became part of the most couture clothes, which brought childishness and lightness to the collection (pun intended). Like looking at them your favorite barbie clothes, in real models. Without losing any of the ease with which he approaches fashion, we’ve seen him marry the seriousness of clothing like the suit, with inflatable plastic collars and hemline skirts. puff balls. 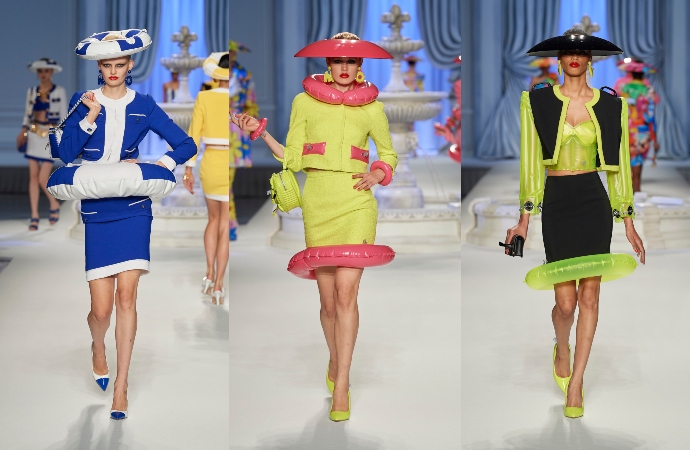 Then there were many children’s ensembles, with even more pools being a staple of masquerade dresses. The highlight of the collection is steel floats as accessories. So we’ve seen mini inflatable life jackets as hats, inflatable dolphins worn as gloves, and more traditional inflatable life jackets worn over dresses. It was all so fun, so kitschy, and at least emotional. Do you like or dislike Scott’s aesthetic? leaves its mark. 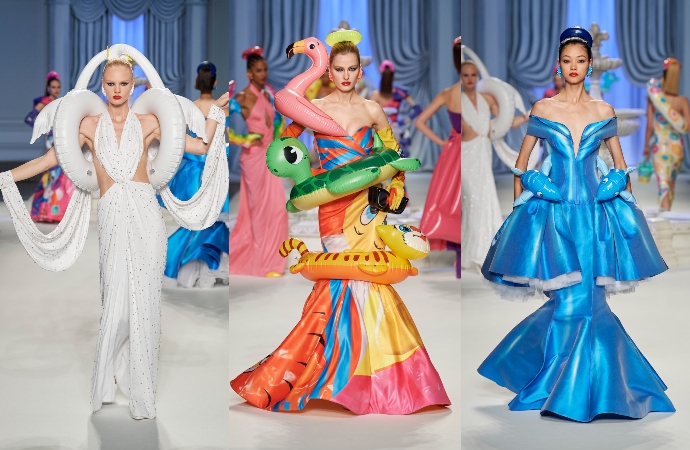 Unlike Moschino’s “difficult-to-wear” clothes, the house Prada notes practicality. He shows us how we can find our “suit” and we offers a look for the office. For the Spring 2023 collection presented at Milan Fashion Week, Miuccia Prada and Raf Simons brought us the good old aesthetics of the late 00s on the podium. Unlike Moschino, they presented a much more “stripped down” collection, which gave minimalism at home since that decade, focusing on workwear. thematic voyeurismthe podium was “dressed” in black, showing the windows of the house from which we all watched the “view”. 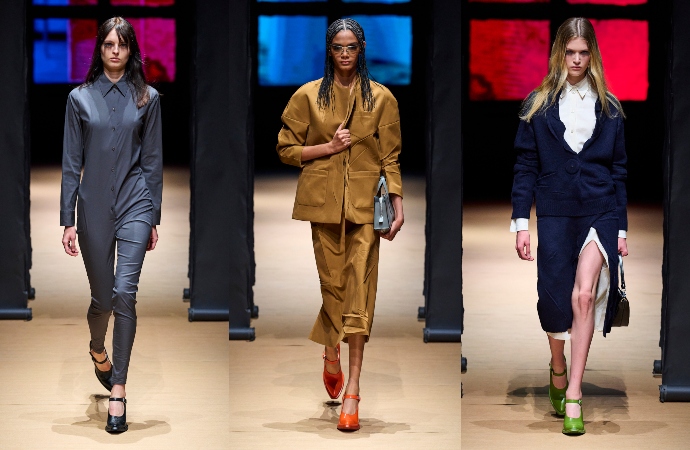 This is n severity and embarrassmentThe pursuit of someone has shifted to a fairly minimalist collection dedicated to showcasing the new generation of workwear. Loose silhouettes in jackets and coats“clean”, in their line, trench coats, full body tight jumpsuits (reminds of work forms), pencil skirts in combination with shirts and cardigans, confirmed this rigor in the collection. However, there were also more traditional female images, for example, with silk ensembles it was more like underwear than clothes. It’s like someone is walking around their house. 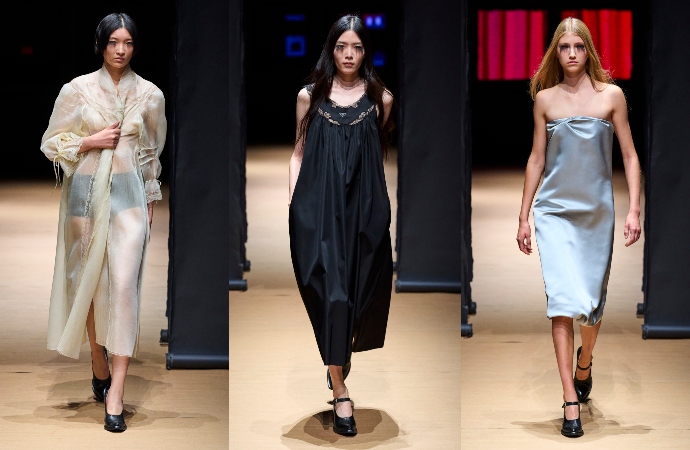 Of course, after designers were inspired by the archives of the house of the 2000s, we saw a resurgence of the trend through the Prada collection. What stood out as a purely 00s trend was tight pants collections. Skinny pants dominated the catwalk at home and we’ve seen them worn in a variety of ways. Combine with a coat, and also wear under translucent dresses. Dresses reminiscent of nightgowns are balanced twisted innocence what was in the collection. “Deep” inside the show, there was something creepy that kept us going. 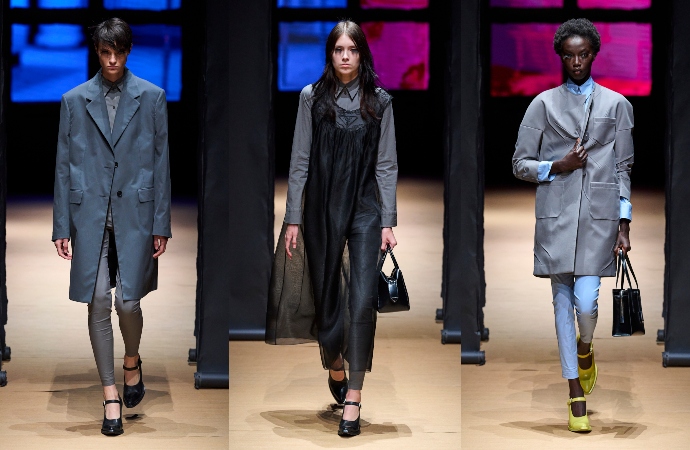 Were the clothes the best we’ve seen at home? Definitely not. But it seems that the two designers are starting to get along aesthetically with each other, presenting a more “collaborative” collection. With the dominant “trump card” of her practicalityPrada gives us a lot of stuff when it comes to work clothes. However, we would like Something other.