Children: a game to understand if the eye is lazy. Benefits of bandaging also for adults? 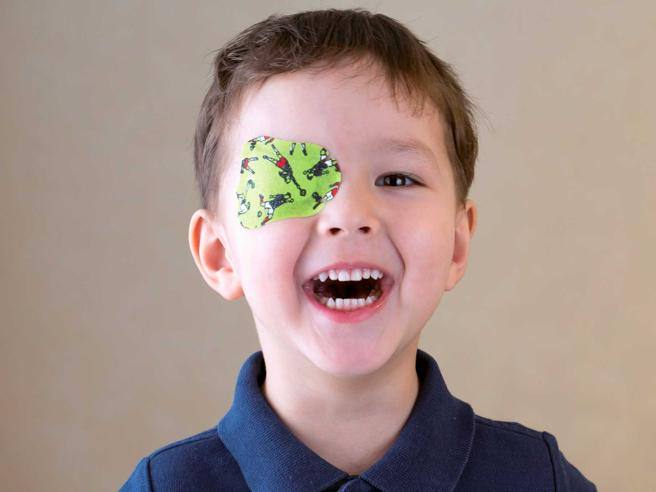 Ro.Mens, at the festival of mental health in Rome a mosaic to break the taboo

To discover in time
amblyopia
ie the
until
«laziness» from one eye to the othersome have come up with one game. From March 2021 to May 2022, the project «Lazy eyes – amblyopia & refractive errors», promoted by the Buzzi Foundation in collaboration with Department of ophthalmology of the Buzzi Children’s Hospital, Lions Milano, the municipality (via the Playgroups department) and Metro 5, which has made a place available at the hospital stop. More than 4,000 families and 93 kindergartens in the municipality of Milan were involved. On average, 25 percent of the children participated. It’s about thousand visual assessment testsperformed by graduate orthoptists, they found visual function problems with the need for further investigation in nearly 30 percent of cases.

To identify the lazy eye, a “game” was proposed to evaluate children’s visual function, divided into stages: first the monocular vision, Then thewith binocular cooperationfinally one was performed refraction test with normal pupil. The game ends with the handing over of a report card»: vegetable if everything is fine (in about 71 percent of cases); yellow
in the case of minor pathologies
not urgentcheck with the ophthalmologist or pediatrician (about 19 percent of cases); red indicating more serious pathologiesthen you program one eye examination at the Buzzi hospital (about 9.7 percent). The children identified with the red code were immediately included in a special list of the Buzzi e hospital
visited in a short period of time. The screening starts again in November and continues throughout the school year.

Shortage not to be underestimated

Discover the lazy eye from an early age allows fix it easier to this disease most common cause of “treatable” visual impairment in childhood, affects 2-5 percent of the general population. Marika Dello Strologo, ophthalmologist at the Buzzi Children’s Hospital in Milan explains: «One early diagnosis and treatment within 6-7 years it is a Correct management of the pathology allows for effective rehabilitation and a therapeutic success that undoubtedly decreases with the advancement of the patient’s age. From here the usefulness of screening programs
in preschool agerecommended by national and global guidelines the
early identification of refractive errors and other causes of amblyopiaimproving not only the visual quality of the little patient, but also his quality of life and education».

«The most common causes of amblyopia – explains the ophthalmologist – are strabismus (eye alignment), i refractive errors such as astigmatism, farsightedness, nearsightedness, L’anisometropia (difference in refraction between the two eyes, for example: one nearsighted and the other farsighted ed). They also exist forms of organic amblyopia where the visual deprivation is due to ocular or brain abnormalities such as congenital cataracts, corneal clouding, palpebral ptosis (drooping eyelid), or anoxic brain damage, which prevent the formation of a clear image on the retina”.

“It’s critical recognizing these organic causes of amblyopia at birth: with the examination of the “red reflex” deviations of the dioptric means (cornea and crystalline lens) and of the retina can be evaluated» emphasizes the expert.

“First of all, it is necessary identify and treat the cause of amblyopia – specifies Marika Dello Strologo-. The goal is make the image clear at retinal level (with possible optical correction, with glasses or contact lenses).) and correctly ocular dominance by stimulating and punishing lazy eyehealthy eye (coming blindfolded)”.
The bandagetherefore it is not an optional but one real therapy. «During the occlusion of the healthy eye, it is important that the child is stimulated with games or activities that he likes (there are specially designed programs and electronic games) to optimize the effectiveness of the treatment – continues the specialist -. Over there criminalization of the healthy eye can also be obtained pharmacologically by prescribing eye drops, atropine, which serves to blur vision to force the lazy to compensate for vision; moreover, they are today intermittent occlusion glasses available, electronic devices in which the lenses alternate phases of opacification and transparency, thus modulating the punishment of the healthy eye. New technologies and alternative therapies are still being tested, but the results are encouraging (perceptive learning, dichoptic training, transcranial magnetic stimulation)».

«A child with untreated amblyopia


will have a visual impairment

that will affect your quality of life: he may have learning difficulties, lower school performance than his potential and an impact on his psycho-emotional sphere – concludes the ophthalmologist -. Further, you become an adult with an increased risk of low vision, when the healthy eye is accidentally injured or affected by pathologies that limit its functionality”. Another reason to treat a lazy eye like a child.

The relationship in adults

The reduction in vision of one or both eyes (caused by an anomaly of the physiological development of the visual system) must be diagnosed and treated as soon as possible, in the first years of life, during the development phase of vision and of the involved nervous structures to collect and interpret the images. Intervention in adulthood is generally not recommended since the brain, losing its plasticity over time, would receive conflicting information and therefore risk “getting confused”. A signal that points in a different direction, however, comes from a recent study by theUniversity of Pisa, published in eLife magazine. The Scholars of the Tuscan University believe sleep may aid in the treatment of lazy eye by helping to improve the brain’s plastic activity in response to visual stimuli. The consideration stems from an experiment conducted on some adult volunteers who kept an eye bandage on for two hours and then were asked to sleep for another two hours.

The study used advanced sleep electroencephalography techniques in combination with a manipulation of the visual experience. The effects caused by the eyepatch I’m took longer in the volunteers than what would have happened if they had stayed awake. That is what the study indicates the function of sleep also applies to the plastic processes involving the visual cortex. The question was by no means obvious, since the plasticity of these structures is traditionally considered scarce and, above all, is based on different mechanisms than those underlying more traditional learning. «The brain of an adult blindfolded for a few hours then gives more importance to the visual input coming from the eye
who was blindfolded – explains Professor Danilo Menicucci, one of the authors of the study -. Sleep helps to maintain this imbalance for longer, especially in subjects who produce more slow waves during sleep (a signal that indicates the consolidation activity of the plastic changes in our brain, ed)».

Share
Facebook
Twitter
Pinterest
WhatsApp
Previous article
Al Qaeda shows up: ‘Atheist and corrupt football, Muslims stay away’
Next article
Budweiser showed off mountain beer that had to be withdrawn due to ban in Qatar

Aifa, automated prescription of innovative medicines at the start: trade union against

Temperatures that are too low, what happens to the body: the risks