In Russia, borderline excitement after Putin’s call for mobilization 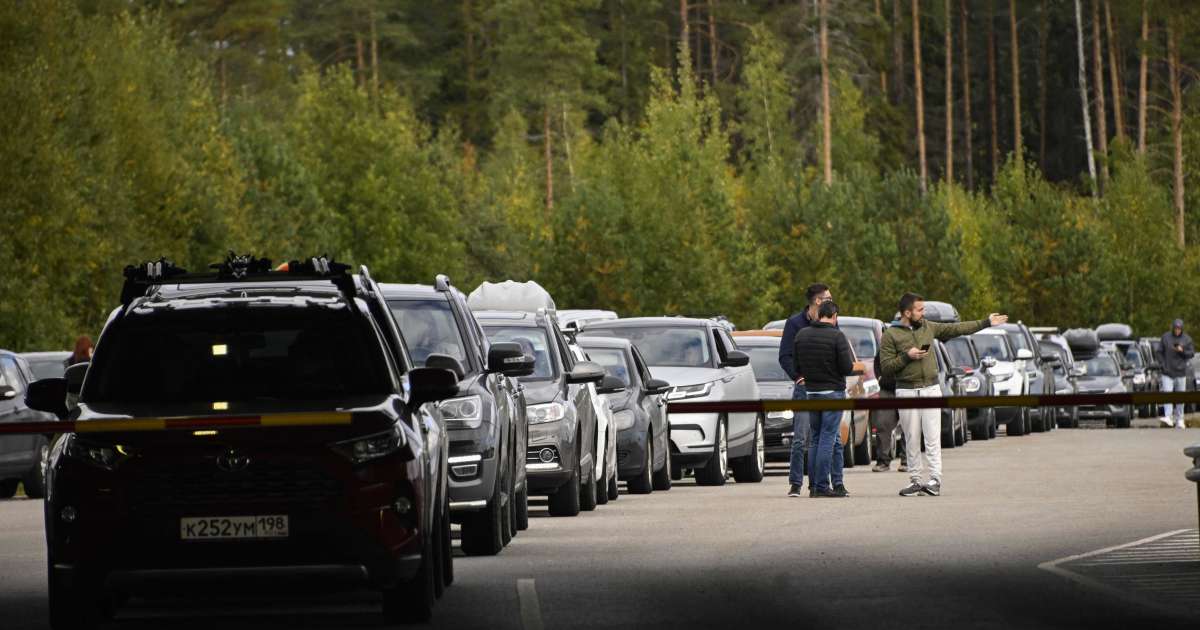 many were waiting “ten o’clock” in their cars before successfully crossing the border into Georgia on Thursday, according to an independent Russian website Jellyfish. As airfare from Moscow soared after Russian President Vladimir Putin ordered a partial military mobilization, many Russians are trying to leave the country by road. Border crossings to Finland and Georgia from Russia “reinforced” overnight, local officials said on Thursday.

In Georgia, “one of the few countries neighboring Russia where Russians can enter without a visa”witnesses told BBC only one “Five-kilometer line of cars” formed at the Upper Lars checkpoint. “Finland, which has a common border with Russia with a length of 1300 km. also reported an increase in overnight traffic.” Helsinki announced on Thursday that it is also considering banning most Russian citizens from entering its territory.

The Czech Republic, for its part, has reiterated that it will not issue humanitarian visas to Russians fleeing their country to avoid mobilization, taking a different stance there from other EU countries, notably Germany, which said on Thursday it was ready to welcome deserters.

As thousands of Russian families began to say goodbye to their mobilized sons and husbands, Putin “Faced with Fury” many Russians, says washington post. “More than 1,300 people were arrested during anti-mobilization protests in cities and towns across Russia on Wednesday and Thursday, in the largest public protest since Russia invaded Ukraine on February 24.”, notes the American newspaper Daily. In the city of Tolyatti, a local military enlistment office was set on fire on Thursday. Dozens of similar attacks have taken place across Russia in recent months, according to the newspaper. “As the room for maneuver shrinks, Putin is making ever more dangerous decisions that could turn Russians against war.”concludes washington post.

Although Putin initially said on Wednesday that “Russia will only conduct ‘partial’ mobilizations targeting reservists with military experience, multiple testimonies from across the country seem to indicate that some Russians were drafted when they had never served in the military.”informs Moscow Times.

Faced with a wave of Russian discontent and excitement at the borders, Ukrainian President Volodymyr Zelensky on Thursday took the opportunity to urge Russians to oppose the Kremlin-announced mobilization. “55,000 Russian soldiers died in this war in six months. […] I want more? Nope? So protest! Fight! Run away! Or we’ll meet” to the Ukrainian army, he began in Russian in his traditional video message. “These are your survival options”.

Meeting Thursday at the United Nations, Security Council foreign ministers demanded that Russia be held accountable for its invasion of Ukraine. But their Russian counterpart Sergei Lavrov chose to leave the room to avoid their complaints, the diplomats said. CNN. “He doesn’t want to hear”Briton James Cleverly launched, and Ukrainian Dmitry Kuleba, a guest, judged that“Like Russian soldiers on the battlefield, so do Russian diplomats flee”.

Kidnappings, assassinations: Iran steps up operations against its adversaries abroad