Meloni: ‘We are ready to lead the government’ 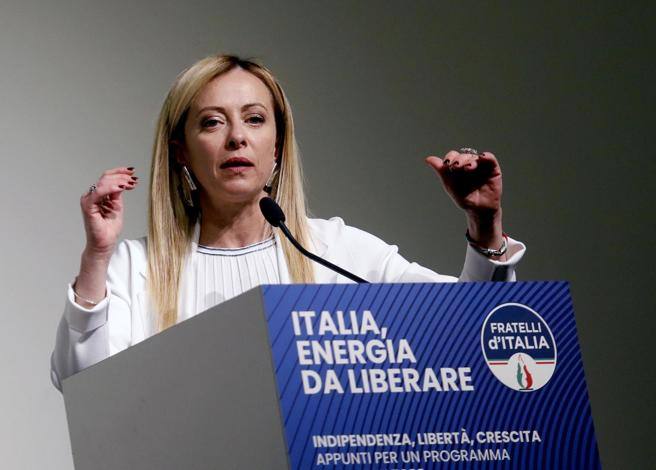 Who is Andrea Giambruno, the companion of Giorgia Meloni who could be the first “first lord” of Italy?

Giorgia Meloni looks to the future (2023 political elections) and launches the challenge by closing the programmatic conference in Milan. “We are ready to embark on a new journey that will bring the ideas of the conservatives to the government of the country. It takes a lot of courage and a bit of visionary. Such people have made history. History is not for cowards. I am proud of what we have built, of the credibility we have been able to earn by always choosing the steepest road ». But, he warns, “we will not go to the government at all costs. We are not sold out. We didn’t go there because the conditions weren’t there. But we are working to be ready for when the Italians should call us to this responsibility ».

Speech falls on center right: “I will not create controversy, because it serves the left and me” I don’t want to do any favors. To the allies I speak clearly. We’re here, there’s left, and where do you want to be? We need clarity, rules and pride. The alliance does not have a revolving door, we win and lose together and we do not join the opponents ». The Musumeci case in Sicily: «He is not sent home to avenge. We respect the rules: the outgoing candidate reapplies ». The allegations against the Allies are strong: «I can’t stand someone who is flattered by the left and throws you in the trash. I can’t stand the inferiority complex that you have to have a pass from the left to rule. It is not clear that the left is playing this game to destroy you ». Meloni wants to represent the silent majority: «This majority wants a leap of pride because we are the ones who can save the country. We want to do it with the center right, we hope to do it with the center right, but we will do it anyway. We do not accept that we are children of a lesser God. You will never find us with our heads bowed to ask your permission to be who we are ».

The President of the Brothers of Italy Claims Her Struggle And Disputes The Way She Does the conference and the themes that were launched were discussed: «They tell us we don’t have any programs. But we talked about energy, Europe (which should be confederal), the environment, Pnrr (completely revised), industrial policy (improvement of Made in Italy and the sea), vocational training. They are afraid of us and tell us we have no ideas. But in Milan we had 70 hours of debate with more than 200 speakers ».

Meloni does not send them to tell the Italian political class. “Politicians sail the wave, they allow themselves to be dominated by events and try to make the most of it. But now we are in full storm and it is impossible to control the wave. They are surfers, we are surfers. We know the route well, the others are in sight. We have not talked about party disputes, small-scale controversies, but about the future. Also addressing unpopular problems, which others do not have the courage to face ». Then the attack on several fronts. The green pass: «It must absolutely be abolished. We don’t want to kill Chinese.” The criticism of the Interior Minister Luciana Lamorgese: “He brings everything to Italy, but we have to take care of the real refugees.” The unions: “They don’t always defend workers, they only think of their members.” About the house and the tax office: «We talked about the tax office to repeat the no to the reform of the land registry. The government lies … The house is a sacred asset to us and we defend it against the bankruptcies of the state, the squatters and the possessions of the left ».

During the speech, Meloni mentions the question of a journalist who calls up the shirts black and put up a nice silent curtain that snatches applause from the audience. And then he starts into a somewhat obscure tirade. «You are ridiculous, do you think these themes solve problems? You don’t want to tell me what you saw here. But your story is off. You wanted to lock us up in a fence, retrogrades that mimic other times. We are experiencing a whole new story. And that’s not where it goes. You dream of a loser, nostalgic, loser anyway. We are successful, modern, respected, not cornered by your stupid comments. Continue to tell your fairy tales and we will make history ». When he returns to speak with more serenity, Meloni explains, “We didn’t want to recreate an old story. We’d be crazy if we didn’t want to move on. We live in a new era and FdI is a new proposal. We are the party of Italian patriots and conservatives. Proud alternative to left, left. We are neither pro nor anti, we are Italians. We reject the provincialism of those who expect legitimacy from others ».

Before the leader spoke, among other things, to a historical figure of the Italian right, Ignazio LaRussa. “That ambition to broadly represent the center right is the ambition we have expressed today,” with “a conservative movement that knows its values, that knows its own history and that knows that it will come back in this way to be even more useful to our cause.” : Serve Italy and the Italians. Giorgia Meloni has loaded our entire history on her shoulders and projected it into the future. » In Friday’s speech, he addressed the problems and not the controversies. To lead Italy we need a program and we need men and women like those of the Brothers of Italy, who are not afraid to involve other people.

Polish Prime Minister Mateusz Morawiecki praised Giorgia Meloni speaks at the Fdi programmatic conference in Milan. “All of Europe lives in the shadow of the war in Ukraine, but that doesn’t mean good things aren’t happening either. The Congress of the Brothers of Italy is a ray of hope and your excellent results in the polls are heralding a wave of change in European politics. Finally, I would like to wish you all the best for the next parliamentary elections. Italy needs your success and Europe is counting on you ».

There was also a message from Petr Fiala, president of the government of Czech Republic, in a video released at the FdI programmatic conference: “I am delighted that your party, led by President Giorgia Meloni, is our partner in the European Conservative and Reform Party. Recent international developments have confirmed that we share several points of view, in particular on the functioning of the European Union and on the international situation. I very much appreciate your party’s firm stance on the Russian attack on Ukraine and thank you for the support I have received from your president in this matter.”

Share
Facebook
Twitter
Pinterest
WhatsApp
Previous article
Raiola’s Empire to Cousin Enzo: From Haaland to Gigio and De Ligt: What Happens Now?
Next article
What happened in Ukraine on May 2: Banners over Zmein, shooting in Azovstal

Finally, on the campaign trail, Donald Trump wants to show that he remains the “King Kong of the Republican Party.”

What if Switzerland joins the EU?

Installment bills, from commerce to tourism: what’s happening (and why companies are struggling to pay them)

Zahavi, head of the Conservative Party in the UK, resigns due to tax scandal

“A new way to make money and spread influence”: IT expert Kosarev on metaverses