Municipal 2022: sparks in the Palermo challenge, between fake posters and awkward testimonials 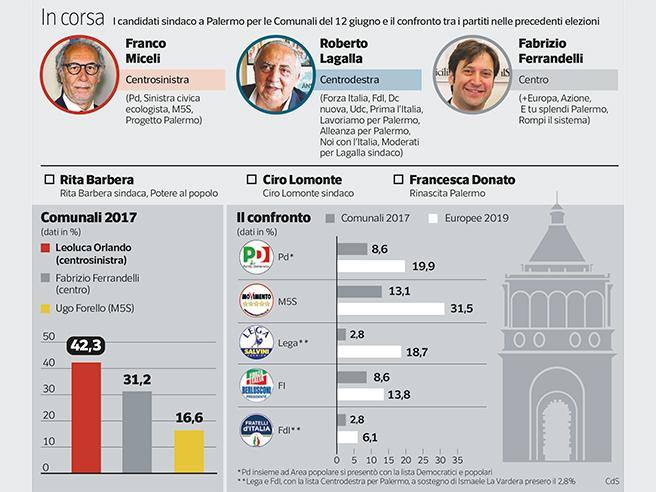 The only thing that is certain is that «Ollannu», the star performer of the Sicilian puppet theater (he boasted that he had «won seven of the seven municipalities»), is not there. He may invent a new life or return to win the prize for best actor on German TV, but forty-two years after his debut in Palazzo delle Aquile, this time, Leoluca Orlando among the possible mayors there is no more. Many will uncork a bottle, especially after the two years of Covid and the coffins scattered all over the cemeteries overflowing, others may already be sighing in regret. But Palermo turns the page.

How will it end now? Don’t know… On the walls, to give an example of the climate, posters against Forza Italia and the new DC have appeared in recent days, so provocative that an already scorching city is set on fire even more. The first shows a fake photo of the late Totò Riina drawing with his fingers a heart dedicated to Berlusconi, the other a shield symbol of the “Colluded Democracy” (textually) quoting Trump’s slogan: “Make Mafia Great Again.” “. goals? Obvious. In the first case Marcello Dell’Utrai, the former Italian senator sentenced to 7 years for external complicity in the mafia association, which crashed a few weeks ago in the Hotel delle Palme in the twinkling of an eye to coincide with the removal of the mega posters of Francesco Cassio (pushed by Gianfranco Micciché as mayor of Palermo with the slogan “I’ll take care of it”) and the agreement on the radiologist Roberto Lagalla, former rector of the university, deputy to Ars, regional councilor for education, initially proposed by FdI, Udc, several centrists and Italy alive. Today absent with Matteo Renzi (“We’re gone”) but present with the Renzians. In fact, the Colluded Democracy fake manifesto is piping hot. In the viewfinder: Totò Cuffaro That after serving 5 out of 7 years in prison in Rebibbia (aiding and abetting Cosa Nostra members and disclosure of a classified investigation) and working as a doctor in Africa, claims the right to engage in politics (“I got it all wrong, I paid everything”) despite the ban on public office, and blessed the former headmaster by bringing him the votes that will reach his new Christian democracy as a dowry.

And that’s the point. Will that explicit support of Dell’Utri and Cuffaro, with what they have represented in recent Sicilian history, help the former headmaster (who thanked him by specifying that at least he will not accept mafia votes) or will it harm him ? Only the results of the polls will tell. As they will say about the response of the Palermitans to the threats of cancellation and to the trenches of resistance on citizenship income.

What is certain is that the battle for the conquest of the municipality is gradually flaring up around a theme: after the Orlando era largely in keeping with the epic of the war against the mafia, we are sure there will be no turning back, to when the founder of the Sicilian DC Giuseppe Alessic he explained to Andreotti That Except Lima was he “who speaks little, writes little, is faithful only to his friends and creates a power around him” as a mafioso but not “tied to criminals”?

Never, cried the Berlusconian ultrà Licia Ronzulli in Palermo: «The mafia exists and those who deny it are stupid or mafia. But the left cannot compare the right with the mafia just because it is afraid of losing the election. We, the government, have passed the strictest legislation against the clans.” And all in unison, with Lagalla and Cuffaro: “The mafia sucks.” Franco Micelic, the architect with the vaguely curly resemblance to Francesco De Gregori, the last Palermo secretary of the PCI and the first of the PDS after Bolognina, a Roman studio in Piazza Navona, who returned to Sicily to fill the gap left by Leoluca VI, monarch without heirs, hammers: “The billion euros already approved for the construction of the tram, the funds from the NHP and a lot of other money arrive in Palermo: I smell business commissions”. More: “It is disturbing, in light of the resources available, that the coalition supporting Lagalla is inspired by a man who comes from Milan to receive the elders of the center right, including the president of the region, and ensure that a recommendation in Lagalla. And I’m referring to Dell’Utri. Not to mention Cuffaro ». Already crucified, on the day of Falcone’s commemoration, by the actor and director Pif, fiercely against the former rector: «Only an idiot can think that there is nothing wrong with support from Cuffaro. Since I am convinced that these are not idiots, but intelligent, I would like to ask, “How do you like it?”

A slogan to which almost the entire left flank knocks and replies (Claudio Fava specifies: “Totò must be recognized for asking for forgiveness, Dell’Utri is much worse”), including the candidate of +Europe and Action Fabrizio Ferrandelli. Punctually pierced by Lagalla and his friends: “But if he was the candidate of Forza Italia five years ago!” Let’s put it this way: consistency in these parts is scarce. Suffice it to recall the case of Ismaele La Vardera that in 2017 he was the candidate of Matteo Salvini and Giorgia Meloni: «Cuffaro was sure that Leoluca would not win on the first try and contacted me:” Listen to me: you should support Ferrandelli in the vote . .. “Never seen much hypocrisy!” As for Salvini, it is difficult for him today in Palermo to return to certain neighborhoods. Five years ago on a monkey with La Vardera (who made a video show about his false candidacy) he shouted into the megaphone: “Unlike Orlando, Ferrandelli, Crocetta and Alfano! Ishmael is coming to clean up Zen!” Giorgia was even more enthusiastic: “Are you only twenty-three? Goffredo Mameli only had twenty-one, boys, but he made the unification of Italy!” Now they are both with Lagalla and his sponsors.Is anyone surprised?Among the six candidates for mayor there is also: Francesca Donato Elected in 2019 to the Europeans in the list of the Northern League, very hard on immigrants, a convinced Putin and no euro, she has gradually turned into a combative no vax etc. etc. The communist will vote for it on Sunday Marco Rizzo and the former magistrate Antonio Ingroia