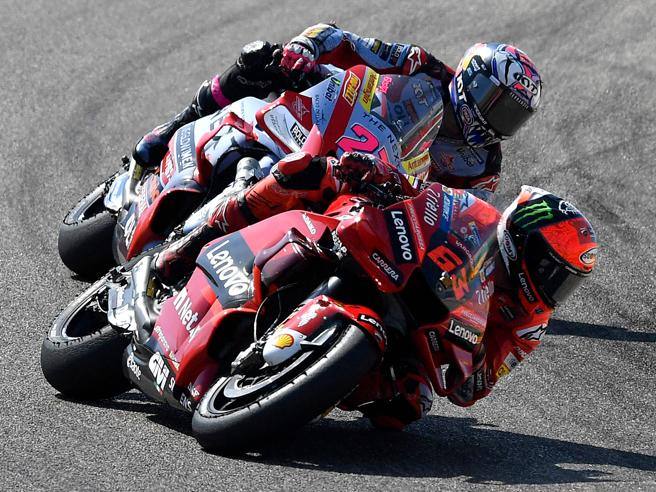 The tension grows with each race. It is palpable in the MotoGP pits as in the words of those fighting for the title. At Aragon, Bagnaia narrowed Quartararo’s deficit to 10 points, thanks to a fall from the Frenchman who was hit by Marquez. But at the finish Bastianini won, the rival who grew up in the Gresini team and was projected into the official Ducati team in 2023. Where they now meditate to intervene to facilitate the race of Bagnaia.

After the victory of Aragon, the team manager of the Borgo Panigale teamPaolo Ciabatti, said: «I would have preferred Pecco to have won, but Enea had a great race. Now we will have to take into account the dynamics so as not to waste the opportunity ». A clear message.
The driver’s title that has escaped since 2007 (from Stoner’s achievement)
is the priority. The need is to work together.

But in Bagnaia, the chorus sounds off-key. ‘I don’t think I need help. I’d rather win on the track”
only to add, “In any case, the decision is not mine.”

The unknown Bastianini, in shape like never before and mathematically on the line, albeit by 48 points, should not be underestimated. «No team orders for the time being – clarified de Romagna -. I have a small chance, but I want to play it by giving everything. I’m more explosive after the summer break and improving from race to race. We’ll see that later. If I receive instructions … ».

On the other hand, it wouldn’t be the first time at the World Cup. In 2017, in Malaysia, a riotous Lorenzo was invited to make way for Dovizioso fights with Marquez (with the non-existent map 8 indication appeared on the dash). Fausto Gresini’s blatant obstruction to Hans Spaan (who hit him on the helmet) in Australia, in 1990, to favor his teammate Capirossi, vying for the 125cc World Championship, is famous. Or the order Mv Agusta gave in Bonera in 1974 to let Phil Read win in Czechoslovakia. Or even recommending Eddie Lawson to help Roberts, slowing down Freddie Spencer, but unsuccessfully, in 1983 at Imola.

It’s running in Motegi, Japan runway favorable for Ducati. It is forbidden to make a mistake in an appointment that promises to be fiery. Yesterday the garage of Marc Vds, the Moto2 team, went up in smoke due to a short circuit. Moments of great fear, but the fire was extinguished thanks to the intervention of half the paddock.