Federer, Friday farewell to Laver Cup: ‘It will be a double, maybe with Nadal’ 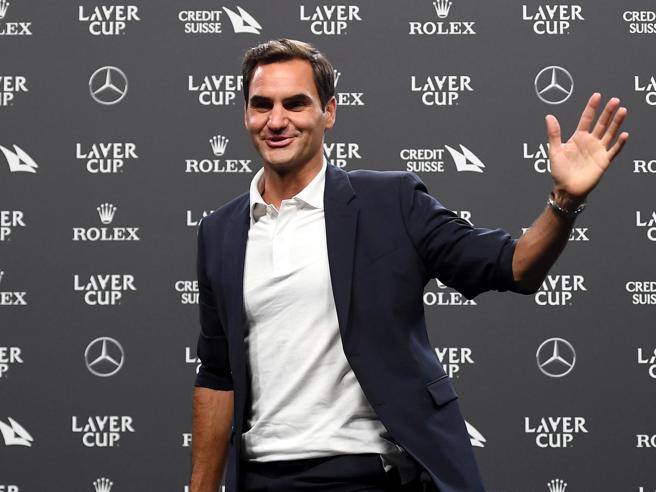 One last urrah on Friday, in doubles, we hope together with the rival of his life Rafa Nadal (“The choice is Captain Borg, but closing with Rafa would be perfect”), in the city that gave him and took, London (“A special place for me: at Wimbledon I had my best wins and suffered the worst defeats”). And patience as the Laver Cup – team Europe v Rest of the World – it’s not a real tournament, but a very rich achievement for billionaires, with tickets skyrocketing: continuity, an event managed by the management, is in operation.

Roger Federer and the last official press conference as a tennis player. Blue jacket, white shirt, Rolex on the wrist. A dry look, too, when talking about Peter Carter, the Australian coach who was the first to understand the potential of the talent of the long-haired, ponytailed boy from Basel, who died prematurely in a car accident during his honeymoon (“Mi I’m sorry me that he didn’t see what I’ve become, I have to thank him for the technique and mindset he gave me “), and when he talks about the process that led to him announcing his retirement from tennis: “In the beginning of over the summer I tried to raise the level of education, knowing that any unforeseen event could spell the end, but the harder I tried, the harder I struggled: I quickly realized I wasn’t where I wanted to be. I wasn’t there yet ready, persevering would have been risky. Tennis is brutal: the five sets, the surfaces, the hours on the court. Returning to the level of the past was no longer possible. I ignored the thought for a while, I asked myself: is it possible to take my time and return to Wimbledon 2023? No, that’s not it. I warned the family, my children were crying: Dad, so we’re not going to Paris, Indian Wells, Rome anymore? We’ll go there again if you want, I replied. Then I called my team to discuss the details of the retreat. I wanted to play forever, but it’s not possible. I have to accept that the time has come to say enough is enough ».

nothing singular in Laver Cup (which airs exclusively on Discovery+), a luxury his knees won’t allow. Matteo Berrettini, the reserve of the Europe team, enters the field in singles on Saturday, Federer will play the last fifteen in doubles on Friday evening. He smiles: “I’m nervous, I hope to have a decent level, I haven’t played in so long…”. Wimbledon 2021, lost the quarterfinals with Hurkacz 6-0 in the third. To remind him now would mean staining the white lace tablecloth with coffee. “It was a nice trip, I don’t want to talk about regrets. Things happen for a reason: even the most horrible kappaos taught me something, they helped me grow. Perhaps the only regret is that I haven’t been more professional at certain points in my junior career. I was too serious!’ Serious and emotional. He cried on the field after the defeats, he smashed rackets. He changed, he became Roger Federer.

Twenty Grand Slam titles, a total of 103 tournaments won (but it’s not a record, it’s Connors’s), over 1500 games played without ever retiring during construction. This is especially the exceptional data: “Well, maybe my longevity is the quality I’m most proud of – it reflects out loud with an actor’s tone -, I too am amazed that I have kept it at that level for so long. I have so much admiration for Michael Schumacher, Tiger Woods, now I understand them.” There is also an overview of the best moments (“Hard to choose: the first title at Wimbledon, the match with Sampras on the grass in London, the winning return in 2017 in Australia, the first and only Roland Garros: I’m lucky to be able to choose …”), about the things he will miss most (“fasten my shoes and bandana, feel the adrenaline rise, the fans who have given me so many emotions: now I have slower and less stressful days . . .”) about the future that awaits him : «I have no plans for next week, with the Laver Cup closed. After a long time on the road, I am staying at home. I would like to read some movies, recover that I have not seengo on a family holiday ».

He has a calm, peaceful autumn tone to his (and our) life. We enjoyed it, talented contemporary among contemporaries, shame for those who will have to find it on You Tube or in the film library. Federer was an experience to do live, such as the Nutcracker in the Scala, the Mona Lisa in the Louvre, dinner in a star restaurant, snorkeling in the Maldives. Then you’ll never forget it. He was – in fact – retired from 2019 (ah, those two match points thrown in the Thames with Djokovic in the final at Wimbledon…), he’s not dead. No more rhetoric, let’s stay sober and united. He promises that he will not disappear: “I don’t see myself in the role of commentator or coach, really, but tennis is my life, this is my environment: I don’t become a ghost, you still see me around me “. With the Beauty retired, the game remains in the hands of the Alcaraz generation, the 19-year-old king of the US Open and of the rankings (“The new superstar, the future belongs to him. It’s a shame he can’t give us can challenge…”) Sinner (which he never mentions). “Powerful, fast, able to produce the most athletic tennis we’ve ever seen” Courts. Of course I wouldn’t expect much service and volley, it’s easier to stay on the baseline! Let’s hear from you in ten years: we’ll see what they were able to build… ». It tastes like a gentle challenge, as if to say I’ve reinvented tennis, let’s see what you’re capable of. Hi Roger, it was great (without dramatization).