Shock protest at Laver Cup: climate activist sets himself on fire for Federer 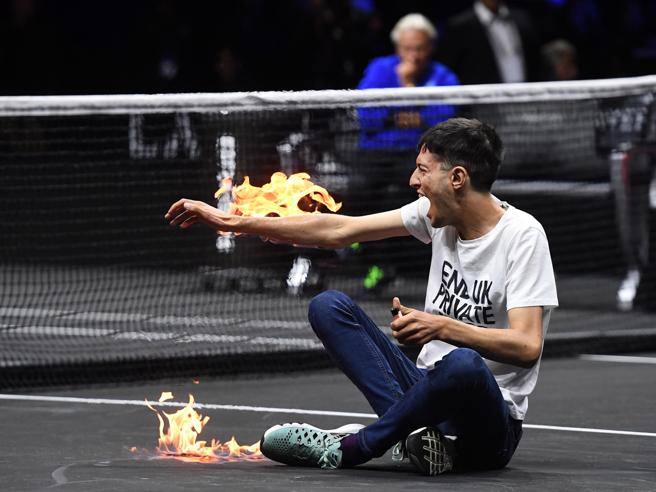 An unplanned event shocked, it must be said, the first day of the Laver Cup. During the second singles of the first day between Stefanos Tsitsipas and Diego Schwartzman, a activist against climate change he has invaded the field, he has positioned himself near the net and started to set his arm on fire. The images of the flames, however quickly extinguished, struck the two protagonists of the challenge.

The televisions obscured the sceneand they continued to frame the two tennis players with puzzled expressions. However, the stewards came quickly to put out the fire which had meanwhile been lit up on the anthracite-colored surface that characterizes the event. The match was then resumed after the intervention of the security guards who took the boy away and cleaned the ground of the remaining traces of flammable liquid.

The reason for the invasion is one: protest against climate change. The boy was wearing a T-shirt with a clear inscription: “Stop private jets in Great Britain”. A theme that was already central to another protest during the semifinal of Roland Garros between Marin Cilic and Casper Ruud, later won by the Norwegian. On that occasion, a woman joined the network to raise awareness about the matter. And even during the last Silverstone Formula 1 Grand Prix, activists had invaded the track.

Share
Facebook
Twitter
Pinterest
WhatsApp
Previous articleCredit Suisse tries to get out of the way to avoid the walk. The title is still not available
Next articleIn the United Kingdom, a mini-budget with a maximum tax cut triggers a growth shock