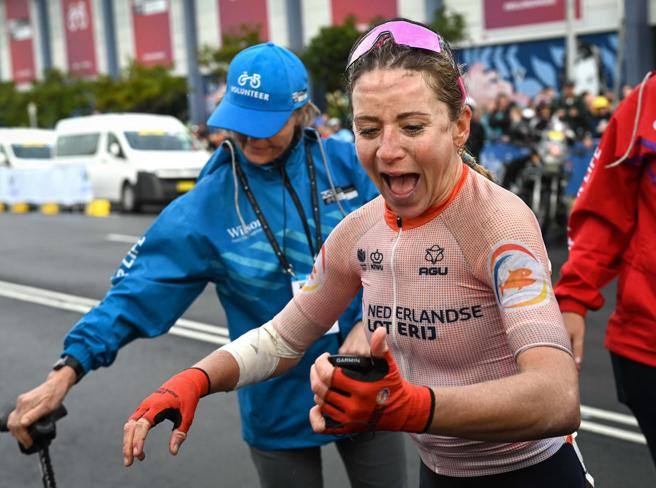 The shot from the helicopter is out of focus, the pouring rain obscures the camera’s eye. But in the haze you can see very well the cyclist in a light salmon-colored jersey who overtakes the group at double speed on the rightdraws the last two corners to perfection and then crosses the finish line with three engines in front. Annemiek Van Vleuten fails to raise his arms on the white line: la fracture in the right elbow causing her to suffer the entire 164 kilometers of the World Championship in Wollongong, Australia, forcing her to keep her hands firmly on the wheel. Those looking for a company that symbolized the greatness of women’s cycling found it, and those looking for a woman next to Eddy Merckx in the Pantheon on two wheels.

Annemiek turning 40 in fifteen days he is on the track for fourteen seasons. To sum up his palmarès is an achievement: only this year he won the Giro d’Italia (the third), the Tour de France, the Vuelta, his second Liège (but there are also two Ronde van Vlaanderen) and actually the second World Championship in a line connecting the two time trials. The Olympic Games and ninety other races must also be taken into account. Born a stone’s throw from Utrecht, the Netherlands, as a young girl Annemiek was a football talent that brought a knee injury (luckily to her and ours) to cycling.

She came to the pro too late because she wanted first obtain a bachelor’s degree (in zoology) and a master’s degree in infectious animal diseasesShe was hired in an analysis lab but after a few months she decided to kick him (“Spending the day in front of the microscope wasn’t my life”) and it wasn’t really a bad choice. Annemiek, who walked with a broken elbow, is able to get back on her feet after a terrible fall. Launched to victory at the Rio Games in 2016, she hit her head on a curb on the descent and was miraculously saved. It took months to recover, a year later he won the first World Cup but the following year – again at the World Championship – he fell and broke his knee. «Here in Australia – he declared on Saturday – I have seen hell. I really went out to help my teammates, but in the end I saw them in trouble. With my elbow in that state, I couldn’t compete in a group sprint, so I started from afar. When I crossed the finish line I didn’t believe it, in fact I still don’t believe it now that I tell you ».

Van Vleuten divorced the Belgian Lotte Kopecky and Silvia Persico from Bergamo, third, who took home another medal from our women’s cycling. “I suffered a lot uphill – said Persico – but I managed to keep the wheel of the first. I knew that Kopecky was the most dangerous opponent and the way I saw Van Vleuten suffer, I could never have imagined such a number ». In a long, hard (too much for the outgoing champion Elisa Balsamo) and very nervous race, our girls did well, with Elisa Longo Borghini doing everything to escape from a distance. Who knows, maybe they won’t inspire the guys (young and inexperienced, except captains Bettiol and Trentin) who this morning (I arrive just after nine) are going to look for a podium solution in a race full of phenomena.

To Kevin Magnussen the Lorenzo Bandini trophy. He will receive it while driving the Dallara supercar