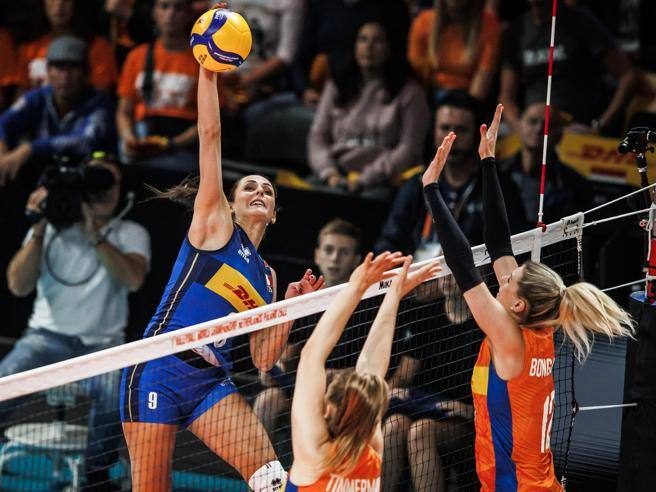 Mission accomplished. Currently. The aim of the first stage of the World Cup was to close the group in first place and fuel the legs and head in view of a very long tournament (the final is scheduled for October 15 and there are still 7 competitions to go) it). With 3-1 (25-13, 22-25, 25-16, 25-21) over the Netherlands, Italy has achieved both objectives. «I am satisfied – explains coach Mazzanti – because we continue to grow. Against the Netherlands we played our best game so far, even if we occasionally give something in exchange for the ball ». For a building that was cold in temperature but hot in cheer, it would have been enough to manage. The Azzurre (despite an Egonu not yet in the hurricane format that will serve from now on) attacked the match from the start against the best equipped team in the group.

An aggressive joke, an always effective wall defense organizationa pair of breakers (Pietrini and Bosetti) with the hot arm and a central (Danesi) always among the best yet, the ingredients for the fifth success of the five in a tournament that Italy has the ambition to win. From Tuesday in Rotterdam the level will rise again: on the blue road there will be Brazil, Japan, Argentina and China (already reported together with the Netherlands, Belgium and Puerto Rico). They bring points and results from the first stage as dowry and the first four go to the quarters. «Lately we have never encountered Japan and Argentina – concludes the coach -. We can still grow, especially in difficult moments, but I am calm: this team is really strong ».

Against Holland, Mazzanti puts the Azzurre in a row with Orro on the dribble, Egonu opposite, Pietrini (preference over Sylla) and Bosetti breakers, Danesi and Chirichella central and De Gennaro free. Italy starts very strong with a very aggressive serve that puts the structure of the Dutch game in trouble. Egonu struggles to find continuity in the attack, Orro relies on Pietrini and a very effective block does the rest and allows the Azzurre to take off. Holland does not react, struggles to find solutions in the attack and concedes the blow. In the second set, the Dutch start much better, they immediately stretch, but Italy falls again. The result is a good point to determine, with the hosts finding an excellent Daalderop and Italy falling to the wall instead and only Pietrini having a valid offensive solution. And in the end, the Netherlands will bring everything back into equality. The blue team returns to the field with the same air of the first set, immediately pushes the accelerator to serve and returns to be more effective with the defensive wall. The reception is also better and the game in the center is benefiting, with Danesi and Chirichella passing regularly and giving Italy the new advantage. Italy continues to play well in the fourth set, the Netherlands concedes something but always keeps the ball firmly in hand. And take home the fifth success in a row.

Share
Facebook
Twitter
Pinterest
WhatsApp
Previous article
A Chinese #MeToo case (against a famous billionaire) in a US court
Next article
1500 won exchange rate – is it a matter of time? Where does the “Royal dollar” go?

Haaland in Maranello: treat yourself to a Ferrari and a plate of pasta at the VIP restaurant

Wirtualna Polska: The influx of Ukrainian refugees has caused an increase in the incidence of HIV in Poland