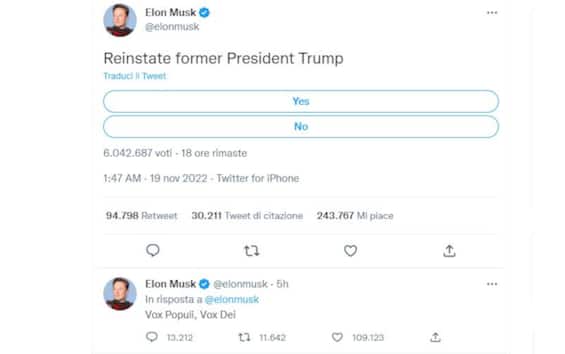 AdBlock: Ad blockers will stop working in Google Chrome in 2023

Hogo Bed, Ronaldo’s bed (from 40 thousand euros): those who use it “rejuvenate” by 15 years

Does the Apple iPhone 14 already have an announcement date? September 6th could be the day!

The former president was exiled after the attack on Capitol Hill on January 6, 2021. The platform’s new owner launched the survey and shortly after tweeted: “Vox populi, vox Dei”. According to some, the choice to rely on the public rather than an internal control body for similar decisions is “questionable and dangerous”.

Take Back Former President Donald Trump On Twitter? This is the survey that Elon Musk launched in the last few hours on the platform he recently bought. Users can vote yes or no and have until 7pm in the US and 1am in Italy.

Trump was banned from Twitter following the attack on Capitol Hill on Jan. 6, 2021. Musk has already reinstated some accounts that had been suspended in recent days, but explained that he had not yet made up his mind about the former president. He then launched the survey asking users to vote yes or no to a possible return of the social media tycoon. It is not clear whether Musk will then make a decision based on the outcome of the poll, although he tweeted shortly after the launch: “Vox populi, vox Dei”.

Millions of votes and controversies

Within an hour, more than 2.5 million users voted. But Musk’s decision to open the poll has also sparked some controversy: Detractors say relying on the public rather than an internal oversight body to decide on the return is a “questionable and dangerous” choice. from Trump to Twitter.

Share
Facebook
Twitter
Pinterest
WhatsApp
Previous article
Russian tennis player Rublev made it to the semi-finals of the ATP Finals for the first time in her career.
Next article
Ambassador Yongawo: Sierra Leone can supply pineapple and cocoa beans to Russia

The story of the Alfa Romeo police panthers continues with the Tonale. There they are

Analysts talked about the reasons for the strengthening of the ruble and the fall in oil prices.

Will Turkey start a new military operation, this time in northern Syria?