Court Invitation. What will Putin’s annexation of Ukrainian territory lead to? 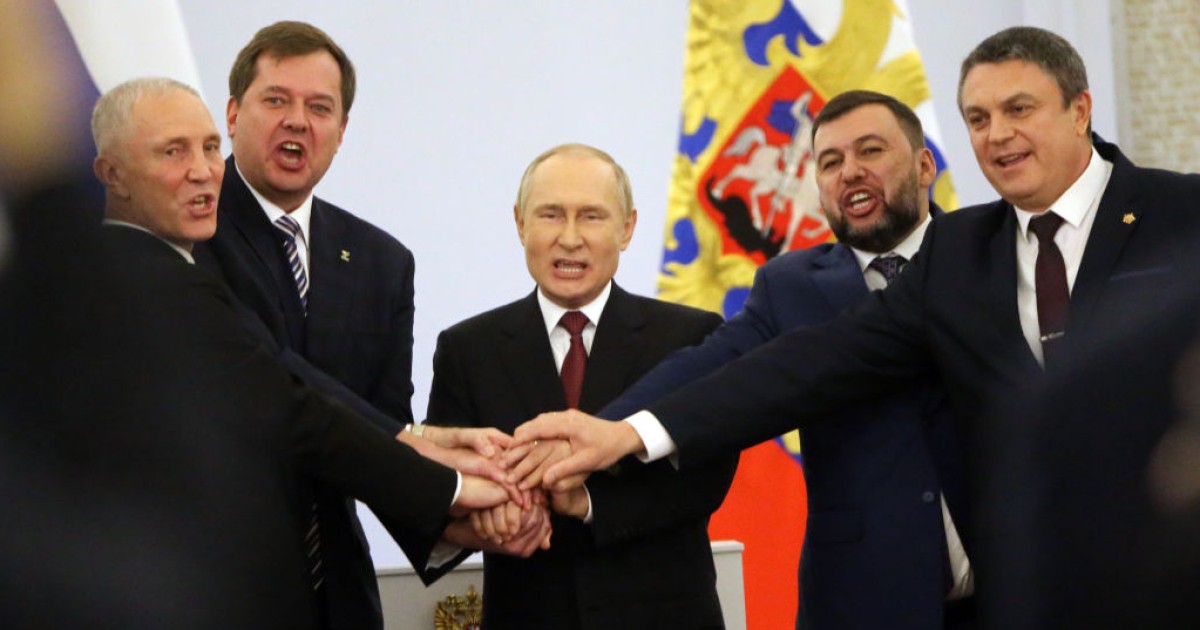 Recognition of the results of the “referendums” is proof that the Kremlin has committed another crime, and this will make Ukraine hold Russian politicians to account.

Putin’s St. George’s Hall: the point of no return

On Friday, September 30, deputies of the State Duma and senators of the Federation Council, Russian ministers and governors attended the Kremlin’s St. They received an invitation to George’s Hall. Putin first met with the terrorist organizations “DNR” and “LNR” Denis Pushilin and Leonid Pasechnik, as well as the Gauleiters of the Kherson and Zaporozhye regions – Vladimir Saldo and Yevgeny Balitsky, and then invited them to a meeting. “solemn ceremony”. President of the Russian Federation Dmitry Peskov announced: Putin will deliver a “voluminous” speech.

A few days before the meeting, it was clear that Moscow was planning to hold a public ceremony for the “signing of treaties on accession to Russia” of the lands of the four regions, one of the stages of annexation. And so it happened.

“People living in Lugansk, Donetsk, Kherson and Zaporozhye have become our citizens forever,” Putin said in the Kremlin, and signed “documents” on the “connection” of Ukrainian lands to Russia and the creation of new subjects of the Federation.

Those present in the Kremlin applauded fiercely and, according to RIA Novosti, Chechnya president Ramzan Kadyrov has already “cryed”.

Like a carbon copy. The Kremlin announced its annexation plans a year ago

If Putin recognized the “independence” of the Kherson and Zaporozhye regions the night before by signing the relevant decrees, he treats the so-called “republics” with centers in Luhansk and Donetsk as separate states from February 21, 2022.

On this day, members of the Security Council of the Russian Federation, representatives of the State Duma and the Federation Council gathered in Moscow for a meeting.

Russia may repeat aggression. Who and how will ensure Ukraine’s security after the war?

Unlike today, there were great trials back then. Various heads of structures and departments spoke. For example, Russian Foreign Minister Sergei Lavrov said that Ukraine has “attacked the Slavs, Orthodox and everything Russian” and that the recognition of the “DPR” and “LPR” will be a “strong signal to the entire Russian world”. ” Russian Federation Council President Valentina Matvienko described the official Ukrainian authorities as “a puppet regime that cannot solve anything” and stressed that negotiations should not be conducted only with the United States and with anyone else. He said that it should be recognized by taking into account the regions under its control.

Only the head of the Russian Federation’s foreign intelligence service, Sergei Naryshkin, was a bit skeptical: “Our Western partners should be given one last chance to make peace as soon as possible and implement the Minsk agreements.” which Putin embarrassed him.

But in all these words, even in the change of Naryshkin, all the future plans of the Kremlin can be read. This includes the occupation of the entire territory of the Donetsk and Lugansk regions and the desire for a change of power in Ukraine, and then the hope of a meeting with Washington from a strong leadership position.

In the evening of the same day, Putin’s appeal to the Russians appeared, in which he threw part of the accusations against Ukraine and declared the recognition of false republics. Paragraph 4 of each of the two decrees says: Russia officially sends its troops to the territory of the temporarily occupied Donetsk and Luhansk regions “to keep the peace”. The next day, the State Duma of the Russian Federation unanimously approved the “friendship, cooperation and mutual assistance” agreements with the semi-forms, and the Security Council of the Russian Federation authorized the use of a regular army on the territory of another state. .

Also, as we know, a large-scale invasion was followed by an attempt to take Kiev and change power in Ukraine in three days.

Trivial decision. The answer to Putin should be the establishment of a special international court.

“In terms of international law, the so-called referendums and the annexation of regions based on their results are unimportant. The accession of these regions to the Russian Federation is against the UN Charter, violates the principle of territorial integrity, inviolability. borders,” he says. Focus Pavel Romaniuk, legal counsel for OPORA Civic Network.

He is sure that the annexation of Ukrainian territory is only evidence in court of a crime committed by the top leadership of the Russian Federation regarding Ukraine.

“Since the fake referendums and annexation of these territories are evidence of an international crime, the aggression of the Russian Federation against Ukraine, the world’s response should be dictated by intensifying our efforts to create an international special tribunal for crime. This will be a clear response in the legal context. Thus, We will be able to bring criminal responsibility as international criminals to anyone who took decisions regarding the annexation of these lands,” adds Romanyuk.

End. The result of the “referendums” is a new phase of the war

“We call on the Kyiv regime, the fire, all hostilities, to immediately stop the war it started again in 2014 and return to the negotiating table. We are ready for this. This has been said many times. But the people’s choice. We will not discuss Kherson in Donetsk, Lugansk, Zaporozhye. It is over. Russia He will not betray her.”

In a conversation with political scientist Oleg Lisny focus Notes: they do not call for such negotiations, because President Volodymyr Zelensky had previously made it clear that in case of annexation of Ukrainian territory, no negotiations can be held with the person who controls it.

Keep the received. Why does Putin need “referendums” and mobilization?

“If Putin didn’t hear it, there’s something wrong with his hearing aid,” says Lisny. “Russia’s actions are predictable. Who’s going to kill him eventually. It’s his swan song, maybe he feels it subconsciously, but he acts anyway.”

Experts say Putin has increased the risks by showing that he will not compromise. On the contrary, he clearly says: Russia can take any steps to achieve its goals, including the use of nuclear weapons.

The holding of fake referendums and further annexation is an attempt to stop Ukraine’s counterattack at the front, which has deprived Moscow of the opportunity to establish a fifth semi-presence in the Kharkov region. After the defeat in the Kharkov region, Putin seeks revenge and hopes that the threat of a major war with nuclear weapons will weaken Western support for the offensive of the Ukrainian Armed Forces. And more than that, he will ask Kiev to make a deal with Putin “for the security of the whole world”.

Political scientist Volodymyr Fesenko said that the Kremlin really thinks that the EU and the US will put pressure on Ukraine and force Kiev to negotiate peace on Russian terms.

But the expert is sure: as with previous plans, nothing will come of it. “Putin underestimates the situation in Ukraine and the response of the West, both before and now,” stresses Fesenko.

For this reason The only consequence of the decisions in the Kremlin will be that the war enters a new phase..

“We don’t recognize any explanation for these old seniles. Therefore, we will continue to liberate the territories. Russia has no sovereignty over the occupied territories, this is the sovereign territory of Ukraine,” Lisny continues. Comrade Putin is addressing UN norms. Russia is pursuing an aggressive imperial policy and this empire will collapse. In his speech, Putin said that the Anglo-Saxons are bad for killing Indians, but they have forgotten Russia’s role in the war. Indigenous peoples issue. “How much they destroyed and now they are destroying. So I am more interested in the reaction of the West. Previously, they stated that they did not recognize annexations, but rather harsher economic sanctions. It is expected.”

There must also be unofficial signals that the US supports our right to use the weapons we supply to Ukraine and the activation of Lend-Lease.

“It’s important for us now to liberate these areas quickly. This will be a slap he can’t handle against Putin. For example, if we get the land back in a week, that will happen. It could be a sign for the Russians and the civilized world that Putin is not in control of what he has taken over. It would be pragmatic, cynical, correct, and most importantly fair,” concludes the political scientist.

After the events in Moscow, President Volodymyr Zelensky announced that Ukraine has applied to join NATO under the accelerated procedure.

And application is required to make de jure.

Pavel Romaniuk from OPORA recalls: The Ukrainian Constitution allows you to apply and become a member of NATO and the EU.

“However, we understand that joining NATO is a well-established procedure defined in this organization’s charter,” he says. “The complexity of diplomatic wars is that there are some NATO member states that may not contribute to such a rapid entry. Working at the diplomatic level so that partners can respond and meet our attempts to counter Russian aggression.”