“Cry if you see me”: “hungry stones” appeared in European rivers due to drought (photo) 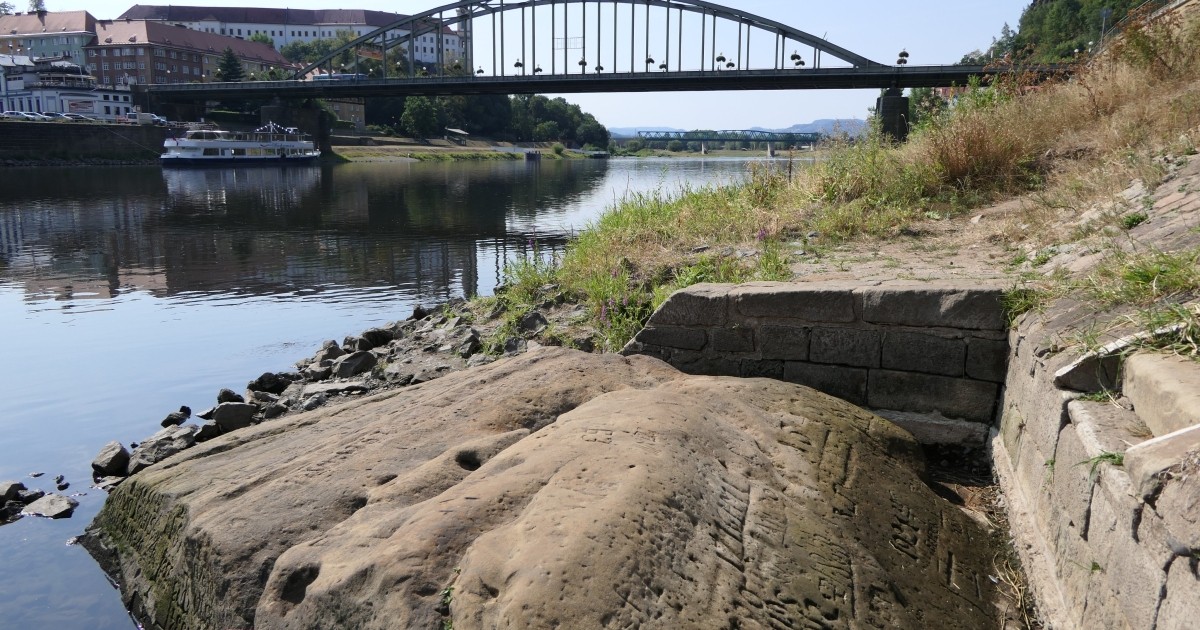 In the Middle Ages, when the rivers of Europe dried up during a drought, local residents left messages on the stones to their descendants, warning them of impending troubles – crop failure and famine.

Western Europe is experiencing an anomalous drought that has caused river levels to drop to a level where so-called “hungry stones” (in German – Hungerstein) are coming to the surface. These are river stones on which the inhabitants of medieval Europe carved messages to their descendants warning of the danger of drought and famine caused by lack of water. According to the British Daily Mail, such stones originated in the Netherlands, Germany and the Czech Republic in the Rhine and Elbe rivers.

The low water level in these rivers is 15-17. The rocks on which carved inscriptions dating back centuries can be seen. On one of the stones on the Elbe, considered the oldest hydrological landmark in Central Europe, an inscription in German is carved: “when you see me cry“. This inscription, a warning of impending trouble, dates from 1616.

The ominous appearance of hungry stones in European rivers was featured in newspapers in the 19th century. For example, in 1876 the Teplitzer Zeitung published a report reporting that the water level on the Elbe did not exceed one meter and that disappointingly prophecies appeared along the coast.

For Europeans of those years, these messages were apocalyptic, as the drought of those years led to crop shortages and consequent mass starvation and death. In modern times, the inscription was noticed in 1918, when the stone was revealed during low water, which coincided with the famine of the First World War.

The current drought in Europe has caused major rivers to become noticeably shallower. As a result, stones that had been hidden from people’s eyes for centuries have emerged from the waters – according to some assumptions Europe has not seen such a drop in the water level in rivers for at least 500 years. The cause of the anomalous drought has been long over the lands of Western Europe. a blocking anticyclone was installedwhich do not allow air masses from the Atlantic to penetrate deep into the continent. Thus, moisture bypasses the west coast of Europe, circumnavigates from the north and sinks to the east.

Water problems are now experienced by many countries. The governments of European states appealed to citizens with a request to use water economically. Spanish water expert Nuria Hernandez-Mora said the current drought raises a serious question about water supply across the continent.

“We need to think about the problem of drought across the continent, not just this summer. Low rainfall coincided with high temperatures. Also, overuse of resources, we are using more water than we have. With further climate change, the availability of resources will decrease. Drought is inevitable, economic losses will increase‘ he stated.

Also, falling water levels will strain supply chains in Western Europe as river transport becomes problematic, if not impossible. For example, the Rhine, Europe’s main transport artery, cannot quite cope with the transport of coal, which will lead to an acute shortage of raw materials in thermal power plants.

Europe is experiencing its worst year in the last 50 years as there is an abnormal drought throughout the month. Heat waves across much of Europe are affecting food production, energy, drinking water and wildlife.

The Ukrainians negotiated the delivery of an anti-missile system to Israel.

Fights and quarrels in the Belgian locker room. And Lukaku doesn’t talk to Batshuayi

The Ukrainians negotiated the delivery of an anti-missile system to Israel.

Pentagon: US has no plans to supply Patriot air defense systems to Ukraine yet