Putin, mystery about the speech: the intervention on the referendum in the Donbass cancelled 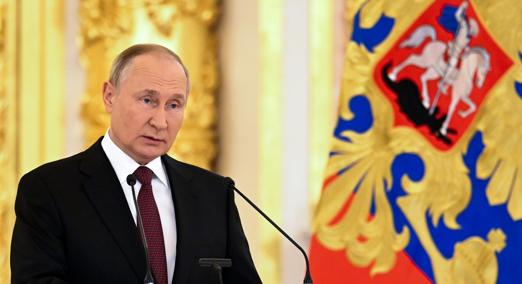 The Russian President Vladimir Putin he was due to speak to the nation on Tuesday evening, September 20 – but his speech, expected at 7 p.m. Italian time, never started, and while Russian television canceled the announcement of the intervention, sources explained the tsar will not speak until Wednesday . There are no official explanations for delaying or canceling the speech. Forbes Russia, citing two sources, explains that the pre-recorded speech is to be broadcast Wednesday morning at 8 a.m. local time (7 a.m. in Italy). Russia Today editor-in-chief Margarita Simonyan wrote on her Telegram channel: “Go to sleep.”


Vladimir Putin would speak with country about referendums proclaimed by the pro-Russian authorities of Donbass to support their request for entry into the Russian Federation, thus bringing the clash with Kiev to a stage of further tension. But the Kremlin leader seems to have decided to buy time, perhaps in the hope that the international community will urge Ukraine to make concessions that can satisfy Moscow. So far, the reactions are in the opposite direction. Something can come out a telephone conversation to take place between the Russian president and Frenchman Macron.

The day after tomorrow, the annexation referendums will start in the areas still occupied by the Russians. Donetsk, Lugansk, Kherson, Zaporizhia and they will certainly bring the expected result: under the “protection” of the Russian army, the overwhelming majority of the population will vote to leave the Ukrainian republic and enter the Federation.

Of course the results will be more than questionable, given the situation (of a semblance of an election campaign, not even a hint, to name just one). And it seems clear that the polls’ appeals were accelerated by the recent advance of the Kiev troops. In November, as local leaders planned to celebrate the anniversary of the 1917 revolution (moved from seven to four and renamed Putin), some of the voting areas could no longer be controlled by the Russians. to be.

It is also a strong pressure on the Kremlin which could also be tempted to abandon some of the separatists to their fate.

Among those who have most endorsed the referendum initiative is former President Dmitry Medvedev, who has become one of the most ardent supporters of all-out war. Medvedev explained well what the consequences of referenda and annexations would be. Consequences that could also lead to a nuclear confrontation.

The vote is expected to take place from Friday to next Tuesday in the four Ukrainian regions. Then the results will be announced and then Russia will have to decide what to do. If he accepts the “will” of the Ukrainian citizens of those areas to “finally reunite with the motherland”, as Medvedev wished, then the annexation will take place soon.

But not only the oblasts currently in the hands of the pro-Russian militias or the regular army would pass under Moscow’s leadership. Those bands and cities that are part of the four regions but currently controlled by the Ukrainians would also become an integral part of the Federation territory. Slovyansk, Kramatorsk, just to name two.

At that time, for Russia, it would be the areas of the “homeland” that are wrongly occupied by the enemy. Who would therefore carry out his war actions on Russian soil. To free them and to repel attacks on other parts of Russia, the military doctrine modified by Putin in recent years offers the opportunity to respond with all available meansincluding the nuclear deterrent.

On the other hand, the high-ranking leaders of the Russian army have longed for the use of “theatre” atomic bombs for years., that is, of moderate power that they believe could be used without triggering Washington’s and NATO’s response. In any case, Moscow is committed to increasing the availability of men to be thrown into the fray and making the army obedient, while Putin doesn’t seem to want to continue proclaiming general mobilizationas the hawks would like.

New recruiting centers are always opening, even for foreigners, and there are plans to increase penalties for those who don’t play the game. The State Duma has passed a measure with a maximum sentence of 15 years in prison. And the measures also apply to a simple “combat action”. That is why the current Special Military Operation has been included.

Biden: I will deal with Putin when he shows his intention to end the war

How to be left without allies because of the war, otherwise Central Asia will refuse to dance to Putin’s pole

Juventus, losses on the balance sheet for 612 million: the story of 5 disastrous years

Biden: I will deal with Putin when he shows his intention to end the war

Zelensky announced that he could impose a possible ban on religious organizations affiliated with Russia.

Generous US aid to Ukraine – cold calculus or concern for peace and security in Europe?