Nuclear bombs and Putin’s cryptic threat: “The compass rose could turn against the West” 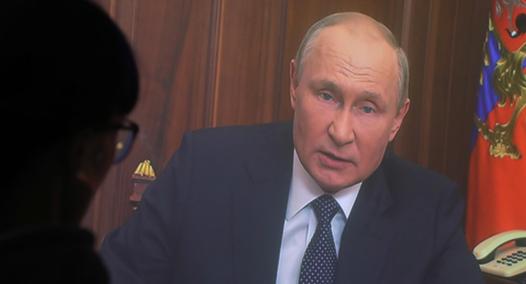 Vladimir Putin
he was waiting to speak on TV in the early hours of this morning, when even the inhabitants of the regions that were ten time zones from Moscow in the Far East could listen to him.

And he said what the hawks have been asking for for weeksgiven the enemy’s successes on almost all fronts: a much more consistent war effort and the use of the scarecrow of nuclear weapons to rein in the West, which “is now doing everything possible through Ukraine and always in other ways to disintegrate Russia after the tearing apart of the Soviet Union.’

And if someone in his circle disagrees with himalso about the possible use of the bomb, they would certainly be people in even more extreme and certainly not more moderate positions.

It is clear that the Russian president supports the decision of the local bosses of the four Ukrainian regions who have held a referendum on annexation to Russia for the day after tomorrow. His country’s armed forces, the Kremlin leader said, will ensure order in the areas under their control to ensure regular voting. Given the situation, an optimistic statement to say the least. And also considering that some of the territories that should “express themselves freely” about their fate are in reality under the control of Kiev and therefore will certainly not participate in the vote that will last until the 27th.

Putin has not explicitly mentioned it, but it is clear that the Duma will then present him with a measure of acceptance of the results of the referendums in the self-declared independent republics of Donetsk and Lugansk from Kiev, as well as in the Kherson and Zaporizhzhya regions. The Russian parliamentarians will then ask the head of state to graciously accept the will of these citizens and annex the territories to the Russian Federation.

The special operation, in Putin’s story, is an open conflict against all of NATO who has always had only one idea in mind, namely the destruction of the autonomy of Russia. All the politics of the West in recent years has only been infused with “hatred of Russia”.

And now? For Putin, it is the West that blackmails his country with nuclear weapons. Almost as if NATO is preparing for an atomic bomb attack. And to those who blackmail Russia, Putin responds with a rather cryptic sentence: “The wind rose can turn in their direction”. Words that could mean that, as happened for Chernobyl in 1986, the consequences of any explosions would also reach the territory of Western Europe.

But the other, more likely meaning is that: Russia also has nuclear weapons it would use in response. The Russian president then went on to state that his general staff will defend in any way the territory and population of the Federation.

That means even by resorting to atomic bombs first when cornered.

As for the mobilization, it is not the call to arms of the entire Russian people, but a “partial mobilization” involving all those who are on the reserve and who have already done military service. However, there are 25 million men from which to choose which to throw in the special military operation, which is certainly not going according to plan in Ukraine.

The exact numbers were provided by the defense secretary who spoke after the president. Of all those who have had military experience, a little more than 1 percent will be chosen, that is, about 250-300 thousand that will be added “after further thorough preparation” to the approximately two hundred thousand soldiers already fighting.

Share
Facebook
Twitter
Pinterest
WhatsApp
Previous articleI had fun in Nice and Monaco: an official from Kharkov got into scandal (photo)
Next articleThe “Diya” service now works with Binance crypto exchange: why is it needed?