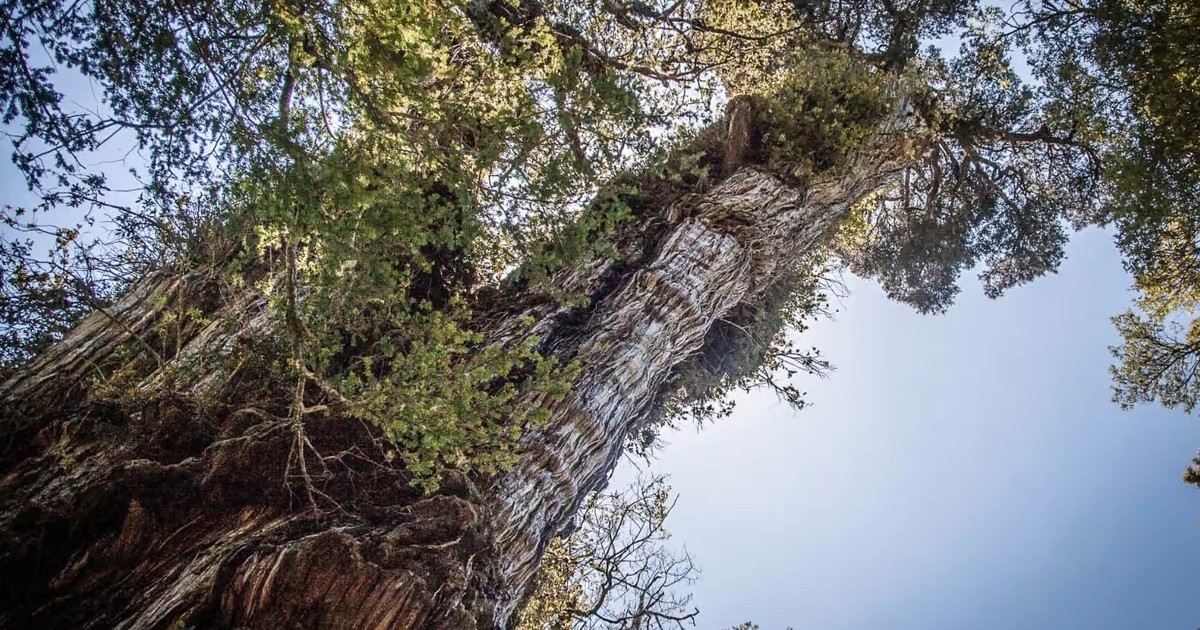 Gran Abuelo, or “great grandfather,” the Fitzroy tree took root in Chile’s coastal mountains in a cool, humid valley that wasn’t threatened by lumberjacks’ axes or wildfires. He can remember how writing was born among people.

Probably the oldest living organism on the planet, it was discovered in Chile’s Alers Costero National Park. This is a Fitzroya cupressoides tree from the cypress family, called “Averse” in Chile, and its estimated age is more than 5000 years. This was reported by The Guardian.

The tree grows in the coastal mountains, on the territory of modern Chile, in a cool, humid valley 500 km from Santiago, where neither lumberjacks nor forest fires threaten. Green shoots sprout from crevices in their thick, dark trunks, and water flows from the lichen-covered bark to the forest floor of the tree snags.

“It was like a green waterfall, it was a huge phenomenon, it appeared in front of me,” says 41-year-old climatologist Jonathan Baricivic, who first met the Gran Abuelo (great-grandfather) tree as a child.

The diameter of the “great-grandfather” trunk is more than four meters, and most of them are dead. The 30-foot-tall Gran Abuelo is covered with moss, lichen, and even other trees rooted in its crevices.

In 2020, Baricivic suggested that Gran Abuelo might be the oldest plant on the planet, and he set out to find out. The scientist, along with his mentor and friend, dendrochronologist Antonio Lara, took a core sample from the trunk. But because the inside of the trunk was nearly rotten, the scientists were only able to get 40% of the core for analysis. The result was surprising – the sample showed the age of the tree about 2400 years.

Not content with what was achieved, Baricivic began developing a model that would allow to determine the age of Gran Abuelo. Taking the known ages of other Fitzroys in the forest and adjusting for climate and natural changes, he calibrated a model that simulated the likely age range and came up with a staggering estimate of 5,484 years. This is more than six centuries older than Methuselah, a pine tree in eastern California that is considered the world’s oldest non-colonial organism. And this is when writing has just emerged among people on Earth.

Baricivic believes this tree has an 80% chance of living more than 5,000 years – but some of his colleagues are skeptical of these results. They argue that the only correct way to determine age is through complete, countable ring cores of trees. Still, the scientist believes his research will help understand how forests interact with climate.

“Gran Abuelo is not just an old tree, it’s a time capsule with a message about the future. This tree alone contains a life record of 5,000 years, and we can see an ancient creature’s reaction to changes that we have made for the life of the planet,” the scientist was convinced.

In his view, data on “great grandparents” could help experts predict climate change over 100 years, and could revolutionize people’s ability to understand and mitigate climate change.

It was previously reported that underwater forests inhabit the coasts of South Africa and Australia, whose area is twice that of India. The researchers found that the forests consist of many mosses that can reach tens of meters in height.

Share
Facebook
Twitter
Pinterest
WhatsApp
Previous article
In the event of a nuclear war, there is no cure for regret.
Next article
Controlling the isolated operation of the Kaliningrad power grid will not affect the electricity supply of the Baltic States.